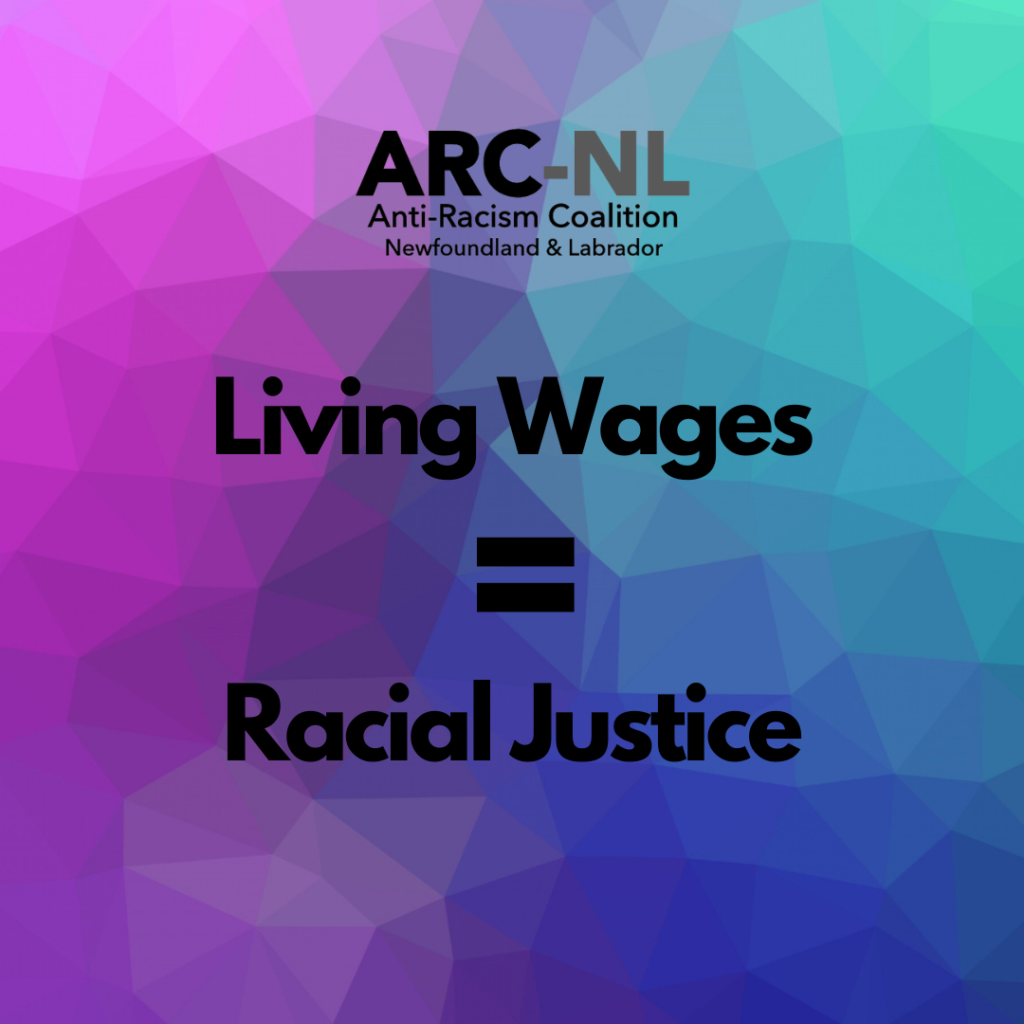 The Anti-Racism Coalition Newfoundland and Labrador (ARC-NL) calls on the Minimum Wage Review Committee to recommend increasing the minimum wage to a living wage as an act of justice for workers and racial equity in Newfoundland and Labrador (NL). The current minimum wage in NL does not cover the average costs required for food, shelter, clothing and other basic necessities. Failing to recommend an increase to the minimum wage, which ensures that all people who live in this province can feed and house themselves, shows a lack of care for all low-wage earners. It is harmful to the social and economic well-being of Newfoundlanders and Labradorians to keep minimum wage at anything less than a living wage. This is particularly true for Indigenous, migrant and/or racialized people who make up a large percentage of low-wage earners.

The living wage “is calculated as the hourly rate at which a household can meet its basic needs, once government transfers have been added to the family’s income and deductions have been subtracted (such as income taxes and Employment Insurance premium)” (Saulnier, 2019). According to the Canadian Centre for Policy Alternatives (CCPA), the living wage in 2019 for St. John’s, NL was $18.85 per hour (Saulnier, 2019). Given the impacts of the pandemic and the quickly rising costs of living in the province, the living wage in NL is likely higher than it was quoted in 2019.

We recommend that the Government of Newfoundland and Labrador (GovNL) and the Minimum Wage Review Committee ensures that an anti-racist lens is employed when reviewing or changing the minimum wage. Taking an anti-racist lens means paying attention to, and redressing wage and wealth inequities facing Indigenous, migrant and other racialized workers in NL. Systemic racism prevents or makes it more challenging for Indigenous, migrant and other racialized people to participate in society and in the economy. While systemic racism manifests itself in what appears to be separate institutions, factors like employment, wage labour, housing insecurity, education and the racial wealth gap are intimately connected.

Increasing minimum wage to a living wage will help reduce poverty and tackle some of the deep disparities in our communities. Nationally, significant wage gaps exist for Indigenous, migrant, and/or racialized workers. Racialized women made 59 cents for every dollar non-racialized men earned (Saulnier, 2019). For racialized men, the wage gap is 78 cents to every dollar. This demonstrates both the gender and racial wage gap in effect. As well, Indigenous, migrant and other racialized people are under-represented in higher-paying professional and management positions, and are over-represented in jobs involving service, sales, and manual labour. Workers in these jobs overwhelmingly make up the majority of minimum wage earners in NL and across the country. Increasing the minimum wage to a living wage would directly contribute to increased economic stability and quality of life for Indigenous, migrant and/or racialized workers and their families in the province, particularly for women, gender-diverse people and their families.

ARC-NL’s Submission to the Ministerial Committee on Anti-Racism, February 28, 2022

ARC-NL presents at the Ministerial Committee on Anti-Racism

What does anti-racism in Newfoundland & Labrador look like to you?

Jude Benoit, Sobia Shaikh
This online event is a pan-provincial forum designed to explore the contribution that diversity plays in supporting the sustainability of businesses and communities throughout the province. The Event will be streamed live on Rogers.
Diversity Summit 2020

Your support is vital to keep ARC-NL up and running. Please support ARC-NL today.